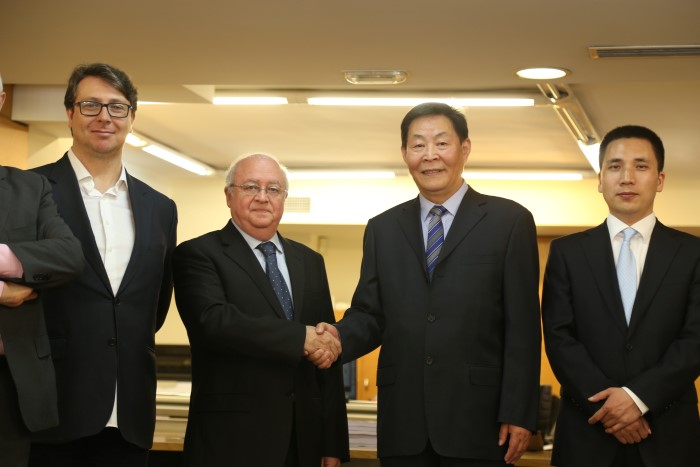 The visit of the Chinese delegation was organised by the Valencian engineering company Vielca Ingenieros, S.A. After the visit, the investment group Xián Quark Brothers Environmental Technology Co., LTD. and Vielca Ingenieros, S.A. signed a collaboration agreement for the technological development, drafting of projects and management of works of municipal waste treatment plants, as well as technical advice for the operation of such plants in the Xián region.

Its aim was to know the treatment technologies used and the administrative management of the waste collection, treatment and recovery cycle in our Valencian Community, considered to be world-leading.

At the end of the stay, they highlighted the quality of the treatment process carried out at the facilities of the Valencia Interior Consortium and the EMTRE, where, in addition to being able to see the treatment carried out in the sorting and recovery line of by-products, they showed particular interest in the composting and affinity line of organic matter. During the visit, they were particularly surprised by the quality of the compost obtained at the Consorcio Valencia Interior plant.

Chinese investors also visited composting plants for sludge, animal and organic waste in order to close the treatment cycle, where the product is prepared for dispatch to agricultural fields.

Plants in all major cities.

In China there are currently no waste treatment plants with the technology used in the Valencia Community. For this reason, over the next five years, the Chinese government has set out to implement this technology in all major cities of the Asian giant. Vicente Candela, director of Vielca, sums up the scope of this measure: “We are talking about about about a hundred plants with a minimum size of three times the size of the EMTRE plant (the largest in our Community) and an average investment per plant of 500 million euros”.

The city of Xián has 3.2 million inhabitants, although together with its metropolitan area it brings together more than eight million people. It is world famous because in its vicinity were found the terracotta warriors of Emperor Qin Shi Huang. Xián is considered the eastern end of the Silk Road, a network that has a historical, cultural and commercial link with Valencia.